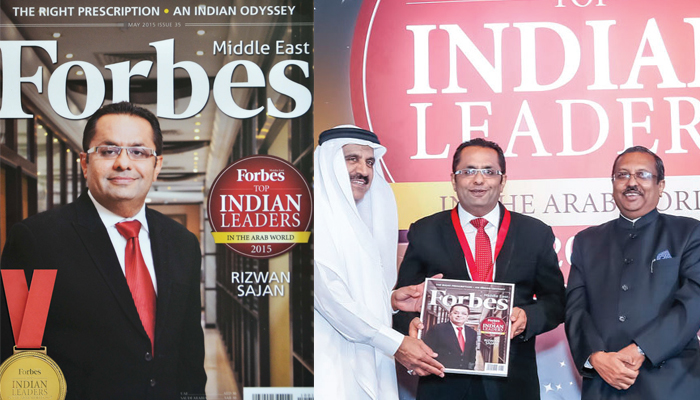 Since ambitious and driven Indians began making the long trip to dusty Middle Eastern shores in the 1950s, the non-resident Indian (NRI) population in the Arab world has flourished. One such visionary is Mr. Rizwan Sajan, Founder & Chairman of Danube Group, a leading construction and home interior company in the UAE. Forbes Middle East has rated the construction & building material icon 12th on its list of ‘Top Indian Leaders in the Arab World’. Mr. Sajan was honored with the prestigious award at a glamorous gala dinner and awards ceremony held in the Godolphin Ballroom, Jumeirah Emirates Towers recently.

Commenting on the momentous occasion, Mr. Sajan in a statement to the press said, “It’s an honour to be associated with Forbes Middle East for the third consecutive year. The award is a tribute to the quality and efforts of my staff. UAE has been the land of gold turning my dreams into reality. On this momentous occasion, I would like to extend my heartfelt gratitude to H.H. Sheikh Mohammed Bin Rashid Al Maktoum, Vice President and Prime Minister of UAE and Ruler of Dubai for being a continuous inspiration to me and my business.”

With 170 individuals making it onto the list, the ranking celebrates the impressive diversity of the achievements of India’s top movers and shakers in the Middle East business world. Mr. Rizwan Sajan has won numerous accolades in the past including the Dubai Quality Award and the Mohammed Bin Rashid Al Maktoum Business Award. Rizwan Sajan was also credited for being the first private expatriate entity to have officially licensed an agreement with the Roads & Transport Authority (RTA) securing naming rights under the second phase of the Dubai Metro Naming Rights Project.